How Do You Know If Hypnosis Worked? 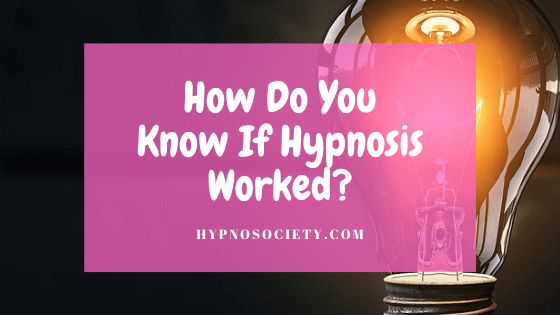 Did you know that hypnotherapy dates back to the 1700s when it was first conceptualized in the scientific world? Obviously, we can assume that hypnosis predates this time.

However, it wasn’t until the 19th Century that the terms hypnosis and hypnotism were coined. These words were coined by a Scottish surgeon, James Braid, who came up with the two words based on the Greek word Hypnos that means To Sleep.

It allows you to experience a heightened but a parallel state of awareness, which means that you will be aware of everything happening around you and also your thoughts throughout.

Hypnosis also allows the mind to glide inwards and to other realities, beyond the immediate surroundings.  Hypnosis involves a high level of open-minded thinking, as well as curiosity, and pretty much everyone could be hypnotized.

It’s also quite common for the individual under hypnosis to drift in and out of consciousness, and you may go deep than other times.

But how do you know when hypnosis is working?

The most common indicators of a successful hypnosis session

1. An enhanced state of relaxation

The hypnotherapists speculate that at this time, the directions/ suggestions communicated to your subconscious mind initiate the necessary changes in behavior which will be felt later on. This is the state that initiates a high state of relaxation.

The other reason for the deep state of relaxation is the creation of a special mental state where people feel relaxed and uninhibited.

It is further presumed that these effects result from your mind tuning out your doubts and worries, or rather, the inactivity of the conscious mind.

Deep hypnosis often means bypassing the critical factor that forms the bridge/ pathway between the conscious and the unconscious mind.

Once the critical factor is bypassed, the subconscious mind becomes highly suggestible, and this is where real hypnosis takes place. Psychiatrist, therefore, theorize that the deep, relaxed, and focused state drive the subdued and calm state of the conscious mind.

Thinking takes a backseat, and though you remain aware of what’s happening, your subconscious mind is the one that is active.

Besides the deep state of relaxation, here are the other signs of hypnosis.

2. Brain Wave Changes in the Brain

The deep state of relaxation experienced during hypnosis is one of the most common body signs of hypnosis, and it’s associated with a slowed heartbeat and respiration.

While these are the most common signs of relaxation for everyone who may or may not be in a hypnotic state, data gathered by researchers shows that there are changes in brain activity during hypnosis.

One of the most notable changes was from data recorded by EEGs or electroencephalographs. This data shows changes in electrical activity during the hypnotherapy.

To be specific, there were changes in the brain waves, depending on the mental state of the individual being tested. Individuals under hypnosis boosted low-frequency waves, similar to the brain waves associated with sleep and dreaming.

At the same time, the EEGs recorded a drop in the activity of the higher-frequency brain waves – characteristics of wakefulness. Although this isn’t a definitive indicator, the recorded brain patterns fit into the hypnosis theory where the conscious mind backs off, and the subconscious mind takes over.

Besides brain wave activity, researchers also note a significant reduction in brain function in the cerebral cortex’s left hemisphere, along with heightened activity in the right hemisphere.

The left hemisphere is the logical control center of your brain, while the right hemisphere controls creativity and imagination. These changes in brain activity fit in with the idea that the impulsive subconscious mind takes over during hypnosis.

Along with the heightened state of relaxation, you might also feel sleepy when undergoing hypnosis. The main reason for the sleepiness is associated with a comfortable and relaxed state that’s created during hypnosis.

These techniques are shown to cause a significant change in the brain function and induce a deep state of hypnosis and sleepiness.

Other Indicators of Successful Hypnosis

These effects may or may not be experienced immediately after one hypnotherapy session. Also, the process might take a few minutes or close to an hour, depending on your personality and your mental state.

Therefore, while hypnosis is a powerful process that could change a lot about your mental state, you should have reasonable expectations. Overall, hypnosis will help you achieve the results you were looking forward to.