How to become a mentalist 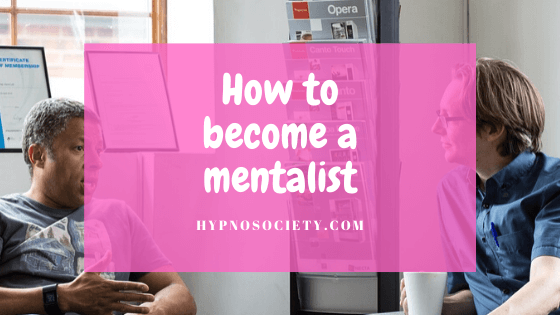 Contrary to popular belief, becoming a mentalist is not a challenging task. It involves developing superior observation and interpretation skills, which is only achievable through tons of practice and years of studying.

Since mentalists are people who practice mentalism, you have to comprehend the different facets of mentalism before becoming one fully. Many people refer to mentalism as a superpower involved with fortune-telling and mind reading.

So, before we know how to become a mentalist, let us find out what is mentalism.

Mentalism combines both the art of imagination and the power of the mind. It is the art of discerning the truth about someone’s life and his/her inherent personality.

When appropriately executed, mentalists can prove to be the most powerful beings in a room with incredible mental prowess or impressive supernatural powers.

Mentalists aid in reading people’s minds, predicting the future, and any other information that could be impossible to find in the present.

How can I become a mentalist?

The mind is an impressive organ. It can comprehend vast information just from your five bodily senses; touch, sight, hearing, taste, and smell. However, this amazing organ also has its flaws. It is quite easy to trick the mind.

For instance, you might have heard of the ‘placebo effect.’

If you have not, it is where doctors or physicians use a saline injection or sugar pill to assure patients that it will make them feel better. The placebo does not have any effect on the patient’s condition, but often the patient improves.

Mentalists take advantage of the flaws of the brain by using strong suggestions, misdirection, and trickery to convince their audience, making them believers of their mental powers. There are several facets to mentalism.

One of them involves manipulation of the mind through suggestion while another consists of using mind trickery. Although they all work by tricking the brain, mentalists and magicians are very different.

Mentalists want to believe that their craft does not involve any form of magic trickery, while magicians confess to playing around with your beliefs of reality or imagination.

So, you want to become a mentalist, but do you have what it takes.

The world’s best mentalists put together a variety of skills to influence others’ actions and thoughts. If you are determined to learn how to become a professional mentalist, here are some tips to follow.

A true mentalist thinks fast and trusts his/her initial instincts before making any judgments or conclusions. You have to have excellent surveillance and take control of any situation that comes across your path.

Luckily, you do not need ESP to be great in decoding and profiling a person.

Simply, practice keenness when scrutinizing people and your environment. Is a person keeping eye contact while talking to you?

Is someone really knowledgeable or just bragging with empty words?

Many mentalists use a variety of manipulation techniques, like the art of cold reading, to convince people of their psychic or mind-reading abilities. Cold reading involves giving high probable guesses that apply to a vast majority of people.

Mentalists know that most people are the same and experience similar emotions when triggering specific memories. They also have similar insecurities, allowing mentalists to decipher certain information that is not easy to know.

Mentalists are just ordinary people with the ability to understand the mind and exhibit such understanding in a manner to suggest they have supernatural powers. A mentalist must have a sharp mind to observe and deduct information without being told directly.

A good mentalist performs a general and non-overt assessment of an individual for reliable background information. For instance, how is the individual dressed?

Are their hands calloused or soft? You should be able to make snap and trustworthy judgments at a moment’s notice.

Observation skills are vital in mentalism. Not only does it improve your memory, but it also helps you in paying attention to small details that the ordinary person may not notice.

A professional mentalist also knows how to bring about and read certain ‘tells’ in an individual. Such ‘tells’ aid in giving you information on what the mind knows, but the memory cannot recall.

Even though someone says they cannot remember a particular piece of information, the brain records everything. The ‘forgotten’ information is often in the subconscious for various reasons. Some ‘tells’ to look out for include:

However, it is vital to keep in mind that every individual is different. Luckily, most ‘tells’ are pretty consistent.

As a result, standing in front of the mirror and studying your own face could help in interpreting them. For instance, think about a positive memory and look at the nature of the pupil in your eye.

Alternatively, think of a negative experience and notice the constriction of your pupil.

By learning how to decipher ‘tells,’ you will also learn how to detect lies by paying attention to body language and noticing micro-expressions.

The art of mirroring is essential in mentalism. It occurs when two people sit and face each other. Mirroring helps in hypnotizing your client by allowing you to make a deep connection with them and create a comfortable environment.

Focus on copying their body language, like when they touch their nose, touch your nose as well. Emulate the same bodily actions they do, and nine times out of ten, they will not even notice that you are mirroring them.

Other than mirroring their body language, you may go a notch higher and also imitate their breathing rate and tone for a more dynamic effect.

You can also apply your mirroring skills while on phone conversations and texting, making the person on the other end feel more at ease when giving you information.

Basically, mentalists are good listeners and know how to read in between the lines effectively. Often, people reveal more about themselves than they initially want. A mentalist listens and deciphers any information given indirectly or subconsciously.

Learn how to join the dots and connect pieces of information without necessarily being told. Becoming a mentalist entails listening to long and boring stories and also paying attention to every word and detail provided.

If you do not listen keenly, you risk missing out on crucial information, which could reveal a truth about someone’s life. For instance, a psychiatrist pays close attention to each and every word said by a client to get a deeper understanding of what he/she is going through.

Similarly, their excellent listening skills enable them to know when a client is lying or telling the truth, allowing them to take appropriate action.

Part of becoming a good mentalist involves learning how to work your brain. Train your mind by playing intellectual games like Sudoku, chess, or solving complex puzzles.

Meditation is also quite helpful for mentalists. It is the art of relaxing your mind into a state of consciousness by focusing on the present moment and turning your attention away from distracting thoughts.

It is also crucial to build your confidence before becoming a mentalist. Confidence is the key to tackling many of life’s issues. If you do not believe it, look at how confident people are more successful than the timid.

A good mentalist stands tall in front of other people and tells them various truths about their life or what they want to hear.

Mentalists are also very creative people. In life, it is normal for things not to go as planned. As a mentalist, you are responsible for making several intelligent guesses.

These guesses may not always be correct, requiring you to divert from such situations to avoid embarrassment creatively.

In such scenarios, a mentalist must maintain calmness, pretend nothing happened, and quickly, but intelligently and smoothly, switch to another topic. With constant practice in mentalism, you will learn how to become more and more creative.

With the help of the right books, anyone can become a master mentalist.

The process of becoming a mentalist reveals so many things about you as a person. You become so self-aware of your weaknesses and strengths, allowing you to be more focused in life and attaining great achievements.

Becoming a mentalist entails trusting your intuition and not giving up as you pursue this new course in your life. Put your heart, mind, and soul into learning how to become a mentalist, and watch how fast you will master the concepts of mentalism.

Similarly, purchase good quality books on mentalism to guide you as you learn the different concepts in mentalism. Proper training is essential to become a good mentalist.

Luckily, the internet has made it easy to access various credible resources on mentalism, like books, articles, and multiple accredited influences.

You may also opt to take an online course on mentalism to learn from the experts. After all, no one said becoming a mentalist was going to be easy.