Hypnosis to Forget Someone You Love 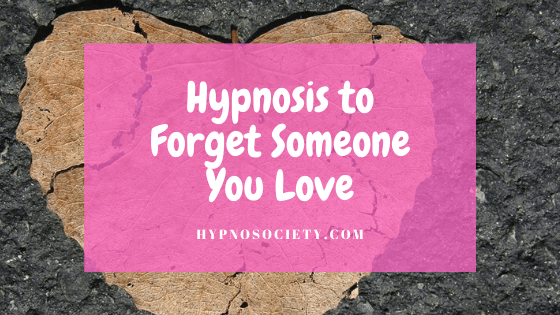 We’ve all watched this movie scene – An individual has been struggling with an event in their lives, and for some reason, they just can’t move past it.

Their friend/ family recommends a visit to a great psychotherapist they know who, after a few sessions, asks their patient to lie on a comfortable couch with their eyes closed, and then they are questioned and asked to recall an event. Or something along these lines.

Thanks to the media’s representation of hypnosis, we’ve been made to believe that hypnotherapy is the most effective technique for memory recall.

But how true is this, and if there is any truth in this, does hypnosis work in reverse – suppress or completely push back memories of an event or an individual? Let’s explore the different elements of hypnosis, and whether you can use it to forget someone, you love, or not.

According to the American Psychological Association, hypnosis refers to the cooperative interaction between a participant and a hypnotist, in which the participant responds to the suggestions put forth by the hypnotist.

Although hypnosis has been popularized by the film industry, where the participants are shown to perform quite unusual and even ridiculous actions, hypnosis has been shown to carry immense benefits to patients with benefits ranging from pain reduction and anxiety management to memory improvement and the management of dementia symptoms.

How does hypnosis work?

Contrary to the ideas put in your mind by TV shows, hypnosis is nothing you’ve been fed.

Instead, hypnosis, through the hypnotist (better known as the coach), involved a guided process through which an individual explores their mind.

It’s a trance-like state characterized by a heightened state of suggestibility, focused attention, as well as vivid fantasies. Hypnosis induces a state of hyperawareness, and it doesn’t involve zoning out or being sleepy.

Hypnotherapy, as it is called in the psychology world, has to be performed by a trained hypnotherapist who uses verbal repetition and visualization techniques to induce the hypnotic state.

Using Hypnosis to Forget Someone You Love

One of the effects of hypnosis is that an individual in the hypnotic state could feel a great sense of extreme relaxation or detachment.

In experiments carried out by researcher Ernest Hilgard, hypnosis is demonstrated to hold an immense ability to alter perceptions. In the hypnotic state, the hypnotized individual may have a reduced or zero sense of pain or extreme cold.

What are the fundamental steps to successful hypnosis?

While these steps might not work always, they represent the standard steps used in hypnotherapy. These steps could also be regarded as the four stages of hypnosis.

NLP or Neuro-Linguistic Programing is a human psychology technique that’s derived from hypnosis. NLP is strongly influenced by hypnosis and hypnosis techniques.

In NLP, it’s assumed that every person’s perception of self or the environment is a creation that develops from one’s individual senses.

Therefore, it would mean that every human behavior, as well as feelings and emotions,  are based/ associated with their sensory experiences. This line of thinking is the reason for NLP’s basic modalities – olfactory, gustatory, visual, auditory, digital, and kinesthetic.

So, where do hypnosis and NLP intersect?

While hypnosis relies on suggestions, NLP tends to focus on the elimination of issues/ problems through the use of the same thought patterns that created the exact problems in question.

Think of how good, confident, and happy you feel when you think about or imagine yourself listening to an old song, a song that always melts your heart and somehow brings joyful tears to your eyes.

Don’t you think it would be an excellent idea to use these happy memories to overcome a negative or sad event today and in the future? To do that, you’d need to employ an NLP technique, also considered a hypnotic technique called NLP anchoring.

In this case, you could touch your cheek as you imagine your happy place.

So, whenever you have a bad time, you could touch your cheek, and the positive thoughts will come back flooding. This technique has been shown to work quite well, and whether you stick to the NLP lane or call it self-hypnosis or even auto-suggestion, it works.

In the same way, you could use NLP or hypnosis to modify thoughts, feelings, or behavior. NLP Flash or NLP reframe, for example, could be used to help you forget someone you used to love or to get over the heartache.

Regarded as a covert hypnosis technique, misdirection is commonly used by mentalists, magicians, and illusionists as it allows them to divert their audience’s attention to something else masterfully.

Misdirection works in hypnosis too because once you’ve bypassed the critical factor, you can avert your subject’s attention from the pain caused by the person they wish to forget towards something else, perhaps happy memories.

Pattern interruption is a common NLP technique that stops a certain mental process right on its tracks. On the surface, no one would know what you are doing since it just seems as though you are changing the subject.

However, that is far from the truth. By bringing up an unrelated thought, you stop thinking about the sad thoughts that were rummaging your mind.

Not everyone believes in hypnosis or the power of NLP, and as people argue for or against the use of these techniques, you need to keep an open mind. Hypnosis could help you forget a loved one, but it may also fail to erase the memories or emotions.

Which is where NLP comes in. Applied by a professional, hypnosis, and NLP could allow you to forget someone you used to know. Techniques like dissociation and content reframing have been shown to be quite effective in affecting memory.