How To Read People’s Eyes 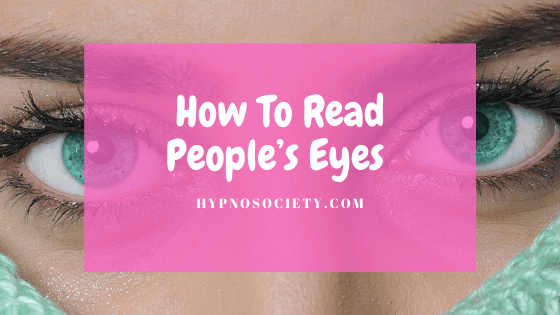 he eyes are the windows to the soul. You’ve probably heard this said way too many times and have, in response, rolled your eyes too many times.

But as it turns out, the power held within your eyes is more powerful than you ever imagined, and you can tell so much more about someone from their eyes than you would if you asked them.

You can, actually, tell a lot about someone by gazing into their eyes. You can also gather so much information about what they are feeling or what their body is communicating (albeit, unconsciously) if you observe someone’s eye movements.

Just think about it for a second: how else would you have known that an arched eyebrow represented surprise while and angled brows represented an expression of anger?

While these are normal human behaviors that we hardly take note of, they show that the eyes hold a lot about an individual’s feelings and you wouldn’t know as much about the by listening to the words from their mouth.

Here is an interesting fact about reading eyes to ascertain thoughts and emotions – the ability to read and perceive an individual’s intentions based on their eye movements develops as early as the age of four. Interesting, huh?

Well, with the basics out of the way, let’s look at the details of your eyes, and how exactly they open doors for communication.

We’ve all heard that you could be right or left-brained. While research on this is still ongoing, it would appear as though there is a relationship between the function of your eyes (in terms of what they communicate) and the brain.

Generally, the direction of a human being’s gaze will reveal a vast world of whatever is going on behind your forehead.

This leads us to CLEMS. CLEMS, also called conjugate lateral eye movements, represent the involuntary movements of the eyes to the right or left.

So, where does the brain come in? Well, a study carried out in 1999 revealed that most people are either right or left lookers with 75% of all eye movements pointing to one direction or the other.

To mentalists and individuals exploring the different elements of human psychology, the directionality of the eyes is an excellent indication and guide to whether the individual you are dealing with is left-brained and more analytical or right-brained, and more creative.

A mentalist’s ability to pick out and analyze the involuntary movements of the eyes, without seeming creepy is why they (as well as psychics) can guess your profession and how you feel about different things.

The Link Between Eyes and Senses

Besides knowing whether you are dealing with a creative or an analytical person, eyes can also tell you whether the individual they are engaging with is in kinesthetic thinking mode, auditory, or a visual mode of thinking. But what do these mean?

Kinesthetic thinking mode is the thought process that someone goes into when they are trying to describe their feelings about something or someone. In this mode, the eyes gaze downward.

The visual thinking mode means that the mentalist’s subject is using images to support their thinking. In this mode, the eyes will move involuntarily forward or upwards, and they will also be unfocused.

The auditory mode involves thoughts that are described as sounds. Often, the subject looks to the sides and in the general direction of the ears.

With this information about eye movements, senses, and thoughts, it’s no wonder mentalists can collect a lot of data from an individual simply by asking some basic questions and focusing on their subject’s involuntary eye movements.

These are just some of the signs of deep hypnosis; click here to learn more.

Other Signs of Deep Hypnosis

However, you can determine the truthfulness of someone’s answers to your questions by checking the direction of their eye’s gaze.

An article by Blifaloo on the directionality of eye and lying, it’s noted that you can tell whether an individual is making up an answer of remembering a memory by looking at the direction of their eyes.

If they are making up a response, they will look up and left (from where you are) – basically, in the visual construction direction (explained above).

You can also tell that someone is making up an event if they gaze downward – this is an unconscious indication of shame or guilt since the person knows that they are lying.

There’s always a catch because the involuntary movements of the eyes often hold more than one meaning, and the lying eyes example above is not 100% foolproof.

While people with shifty eyes were, for a long time, believed to be lying, it was later found out that the shifty eyes could not be definitively used to describe an individual as lying since the same eye movements are seen in individuals trying to defend themselves from accusations.

In understanding the effects of events on the eyes, psychologists and mentalists have also studied pupillometry to understand communication via the eyes.

In a bid to understand human behavior, it’s been shown that dilated pupils indicate that you’ve seen something stimulating or that you are trying to see in low-light conditions. Arousal also causes the dilation of pupils.

This is the other nonverbal clue related to the eyes. Regarding eye-blocking or the physical shielding of eyes, humans (and animals) shield their eyes when they feel threatened, repulsed, or when they don’t want to see something.

Eye blocking is, therefore, an indication of discomfort, consternation, disagreement, and it could also mean disbelief.

Mentalism might look like the possession of magical abilities, while it is, in truth, the process that involves a deep understanding of human psychology and human behaviors, having a keen eye to detail, and using your observational skills without coming off as spooky.

If you are a great mentalist, you can tell a lot about your subject by reading their eyes.