How to hypnotize a chicken 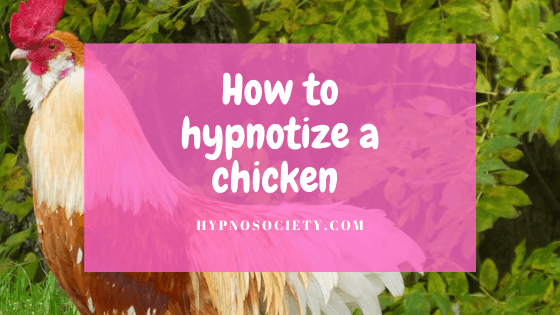 Animal hypnosis commonly referred to as tonic immobility, is not like the ordinary hypnosis people think of when talking about hypnosis.

It involves inhibiting the animal from moving as a restraint response. The animal is physically restrained, allowing it to become immobile for some time.

Once the immobility phase ends, the animal abruptly makes an almost immediate transition from stationary to mobile state. In human beings, hypnosis involves several verbal suggestions and guided relaxation techniques, while in animals, it merely involves making it immobile.

As a result, animals are not self-aware and cannot provide introspection like humans do as they do not provide information about their subjective experience.

Learning how to hypnotize animals is not a challenging task as it only requires dedication, time, and effort to learn how to execute this impressive skill properly.

A chicken is one of the simplest animal species to hypnotize. However, horses, cats, and dogs are also widely used as hypnosis subjects. So, how do you hypnotize a chicken?

Chicken hypnosis dates back to the 17th century when Pavlov and Darwin took an interest in it. The first written reference of chicken hypnosis was by Athanasius Kircher, a German Jesuit scholar, in his published polymath, Mirabile Experimentum de Imaginatione Gallinae of 1646 in Rome, Italy.

More so, the avian scholar, Gordon G. Gallup Jr. wrote a report suggesting that chicken hypnosis dates back to the times of the Old Testament.

Animal scientist Thomas V. Craig, from Kansas State University, is well known for hypnotizing chickens in class, sometimes even two at a time.

The professor confesses that staring at the chicken’s eyes intently, makes the chicken stay in a hypnotic state longer. He further says that you do not require real eyes to do it, just two ping-pong balls with black spots on them are sufficient.

Anyone who has spent time on a farm with chicken probably knows how to hypnotize a chicken. For those who are new to this trick, I assure you it is a fantastic sight to see a chicken hypnotized and following the instructions as suggested.

Many ethnologists refer to chicken hypnosis as a natural state of semi-paralysis, often caused by fear, resulting in dread or an attempt to ‘play dead’ to fool any predators.

Many people hypnotize chickens intending to relax them, calm them down, and soothe them during times of stress and fear. By following the steps below, you can also learn how to hypnotize a chicken in no time effectively.

1. Hold the chicken down

Find a flat surface, like a flat ground or a sidewalk, where you can hold the chicken down so that it rests on the ground with its breasts carrying the weight.

It is advisable to hold the chicken with one hand and supporting its breast with that same hand before placing it on the ground. Make sure you hold its feet so that it stays in one place as you perform the hypnosis.

You may also opt to place the chicken to lie on its breast. Press it gently down on its back and move its legs to the back gently to prevent it from running away from you before you complete the hypnosis. Make sure its beak/head is seeing the flat ground.

There are several ways that you can hypnotize a chicken, including:

a). The oscillating finger method

As one of the easiest methods to follow, this method involves the use of your finger.

Once the chicken is laying on the flat surface, make sure its crown is facing straight to the ground. Proceed to place it on its side with a wing placed under its body and gently hold it down.

Use one of your fingers from your free hand to move it back and forth in front of the chicken’s beak. Move your finger from the beak’s tip to about four inches away from the beak, without physically touching it.

Keep your finger a line parallel to the beak while making sure that the chicken is following the movement of your finger.

b). The chalk line method

Discovered by Almanac, an old farmer, this method involves laying the chicken on its back with its beak held down. Using chalk, your finger, or a stick, draw a straight line on the ground about 30 cm or a foot long.

With the chicken at one of the ends of the line, it will lie there, staring straight at it for a few seconds; thus, tonic immobility.

While the chicken is lying on its back, hold it downwards and gently rub its sternum by using the index finger and thumbs of your free hand.

However, you must make sure the chicken does not move to its side, which may, in turn, affect the hypnosis from becoming effective. You may use a purse, book, or other items to prevent it from rolling onto its side.

Another way to hypnotize a chicken is by mimicking its actions. Once you place the chicken on the flat surface, tuck its head under its wing. It should feel any pain or experience any harm as chicken sleep in this position.

Proceed to rock it side to side, like an infant child, for a few seconds.

Once you carefully set it down after moving it from side to side, it should stay in the same position for a while, meaning it is in a hypnotic state. If it freaks out and starts moving immediately, try this method again or try another one.

e). The Weight and Rests method

In this method, you hold the chicken with one hand while the same hand is supporting its breast, which should be carrying the weight. Once you place it on a flat surface with its weight on its breast, gently press it down on its back.

If it attempts to move, gently move its legs to the back of its body. Once it lies in this position for a while without moving, it should go into a hypnotic state for a few seconds.

3. Wake it up by clapping

However, if you want to let your chicken go back to its regular business, give it a gentle shove or clap your hands until it jumps and walks away from you.

Tips for hypnotizing your chicken effectively

It is vital to understand the hypnotic impact on animals to perform the trick efficiently. Hypnosis in animals is known as tonic immobility. Once a chicken or any other animal becomes frightened, it stops moving, and its heart rate slows down.

Experts say that this reaction response is meant to fool predators that they are dead since they prefer live prey. However, a chicken will continue to breathe and blink, unlike an opossum.

2. Keep the chicken lying on its side or upright

Placing a chicken in an upside-down position increases the risk of breaking its hip.

However, since some techniques involve holding a chicken in an upside-down manner and cutting off its air supply to induce a state of trance, this position can also cause discomfort, which may result in fainting or death, although in very rare cases.

Exercise caution while placing the chicken in this position to prevent any undesired outcomes.

3. Keep the hypnosis infrequent and brief

Since no one has ever gotten feedback on the subjective experience of hypnosis in animals, we do not know how much stress this effect causes animals.

The chicken should not suffer after you let it go. Keep in mind that regular exposure to stressful situations or long hours of being exposed to stress can lead to severe health problems in any animal.

Animal hypnosis has been around and in use for many centuries.

With chickens being one of the most delicate animals, they are easy to hypnotize as compared to other animals. Some experts suggest that domestic birds are more challenging to hypnotize than the wild ones because wild birds use hypnosis as a defense and survival technique.

However, regardless of the type of bird used, it is crucial to ensure it does not experience any harm while under hypnosis.