How to hypnotize someone to do what you want 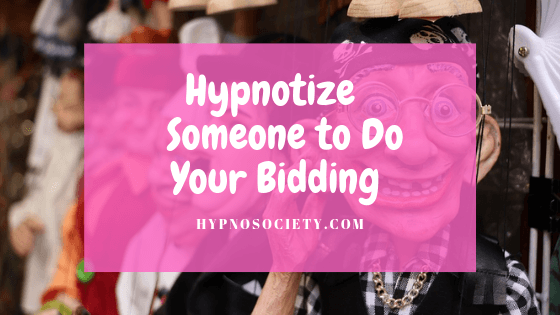 There is a morality question that comes into play when we are talking about how to hypnotize someone, but that is mostly a personal matter.

There are, however, instances when people around us would want to be hypnotized to reach a specific goal. We are going to explore how you can control a person’s thinking and behavior.

If you’re new to hypnosis, then you likely have uncertainty about if it will work or not.

That has to be put aside if hypnosis is to work.

Have a conversation with yourself with regards to the power that you hold within you. It requires confidence and the ability to follow through it you are to be successful in hypnotizing another person, especially without their knowledge.

Something to understand early on is that hypnosis is mostly non-verbal and therefore you cannot afford to be nervous or in doubt.  Take time to evaluate yourself.

Find out what areas you could use a confidence boost that would allow you to hypnotize another person.

The power lies in the delivery of words you’re speaking during the hypnosis process.

Hypnosis for one person won’t work the same for another.

You have to observe someone first and understand them.

You don’t want someone asking you ‘why are you talking slowly?’ when you’re trying to hypnotize them.

There is a level of research that you have to do in the person before attempting hypnosis.

If you just met them, you’ll have to converse for a bit longer, say for when you’re at a party, and you do meet someone you like.

For people you know, there is already that rapport, and you see the way they talk.

In both cases, you have to match their conversational voice.

What matters most is the tone; the words won’t work if you don’t also match someone’s vibration.

Also, match the kind of conversational words the use; you don’t want to use complex words for someone who uses everyday vocabulary.

Also, if they are nervous, you first have to ease and calm them down before trying any of the words.

Understand the process of hypnosis

In hypnosis, there is no one singular route. You will even find people who conduct professional hypnosis switch up their way of doing things depending on the person.

That is why the previous step is essential. You have to be armed with tools of awareness but also being flexible during the process.

One of the strategies of being able to hypnotize someone is ambiguous. An example is “I sense an energy shift in you” that could apply to anyone.

For one person, they will admit they are nervous, and the other will be quick to say that yoga is working for them.

It is when people are trying to establish what you mean or what it is you could be talking about that when hypnosis begins.

Their mind is full of thoughts trying to interpret your words that they won’t know what’s coming next. That is, of course, speaking to them commands.

That is the essence and where you get to control their thoughts and actions.

Keep the commands short such as “sit down” or “finish your drink” “let’s go” “let’s have fun” and the like.

It is essential that you establish your intention and what you need to be done before you begin the hypnosis. Are you with a friend who doesn’t like parties?

You can hypnotize them to where they end up enjoying themselves.

Are you with a person you want and wish for them to dance with you? You can achieve that too.

Remember that it is when they are busy processing the ambiguous statements that you’re able to slip in command for them to follow.

Even with the short commands, this person is not a pet.

These quick commands need to be incorporated within a statement, often leaving someone to feel that they have a choice in the matter even when they don’t.

Therefore, when you want someone to dance with you, the statement could go, “If you were to dance with me, you might find that I do have some cool moves to show you.”

Here, ‘dance with me’ is the command, while “some cool moves to show you” is the payoff of following the command.

Pause after the command so that there’s an emphasis.

There needs to be a reward system at play as well to entice someone to do what you wish. That way, they will end up thinking that it was their idea to dance with you when, in essence, you planted the thought in them for them to follow.

Therefore, avoid saying ‘dance with me’ only as it is a command, especially if the person is apprehensive in the first place.

You can only get away with a single command when you’ve created a rapport to the point where they have followed previous commands, and they are willing to do anything at that point.

In your delivery, you don’t want to come across as being forceful or dominant.

Keep a conversational tone when you’re delivering your command. However, what should happen is that when you get to the part of the sentence with the command use your inner power to drive the words out.

Therefore, ‘dance with me’ would have more power behind it than the other words in the sentence.

Here, controlling your power is about knowing where you to apply it the most for maximum effectiveness.

Controlling one’s power also has to do with your intent. Once you learn to hypnotize a person and it works for several people, there is extraordinary power that you wield over others.

Don’t lose sight of why you’re doing it; otherwise, it will come to backfire on you when you meet someone in a different and higher vibration than yours.

They will likely know what you’re up at and confront you, leaving your confidence in limbo.

How does it all work?

Hypnosis, so far we have established is giving a command which is delivered with power within an ambiguous statement.

Ambiguous statements are frustrating, and that is where hypnosis all begins when you want to get someone to do what you want.

When you give such comments, the other person’s brain becomes confused as they search for a hidden message in what you’re saying.

A person retreats into their mind trying to make sense of your words, but when they can piece together the command, they’ll only be too willing to comply because it brings a sense of clarity with them.

You won’t get it the right the first time, if you do, then your vibration is high, and you have more power than the average person. What you will require is learning to be in the moment.

That’s how you get a feel of what matters to the person.

If they like sports, then that can be an entry point.

If they like talking about current events, then that is another entry point. It works different for everyone, and that ought to be kept in mind.

When you’re good at hypnosis, you’ll be hearing phrases like “I don’t even know who I agreed to that” or even “how did we even come to do XYZ?”

This kind of hypnosis is therefore not about creating zombies but about having someone present enough to do what you need them to do.

You have to be bold and creative when undertaking hypnosis. You have to be confident within yourself that you can eventually do it even though you don’t get it on the first few tries.

It is, after all, a matter of practice. As you’re hypnotizing someone, use a combination of commands and ambiguous statements. These statements ought to feel as suggestions instead of commands.

The first part can hold command and the next one, with a somewhat submissive stance, create the payoff. Combined, someone feels that they have a choice in what they do.

If anything, people consider it a fantastic idea and something they are willing to follow through with. The best time to start practice is when you’re having everyday conversations with people.

Whether you’re having an argument or you want something done, use the power of hypnosis to get your way. This kind of hypnosis is much similar to persuasion, but the difference has to plunge someone’s mind into confusion first.

“I feel a shift in your vibration” followed by “there are tons of fun things you could have done but were they right” coupled by “It doesn’t matter just enjoy yourself, vibrations will always be as they are” get the brain thinking.

A command to dance would be a welcome distraction.

Try it daily and watch your hypnosis powers grow and thrive.

Start small and indeed build your confidence before proceeding to the heavy stuff.