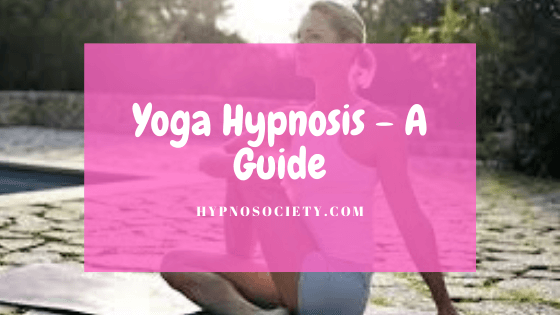 Hypnosis and Yoga– what brings these two together, and how do they relate to each other? And if you do yoga, do you know about, or have you tried yoga hypnosis?

Do you know what yoga hypnosis is? And, what comes in mind when you hear yoga hypnosis? Where is the intersection between yoga and hypnosis?

All About Yoga and Hypnosis

Yoga dates back 5,000+ years, and it’s believed to have originated in the Indus Valley where. Like hypnosis (especially self-hypnosis), yoga, as well as meditation, involves creating peace of mind.

Meditation is an important aspect of Yoga, which, although it exists as a separate entity that’s existed for centuries in many parts of the world. Hypnosis has also been around for quite some time with ill Egyptians and Greeks traveling to specific healing places referred to as ‘dream temples’ or ‘sleep templates’ to be cured.

The said cure was hypnotherapy. Hypnotherapy is a form of alternative therapy, and over the years, it’s been regarded as the therapeutic process that helps people ditch their bad habits.

Over the years, hypnotherapy perforated modern society, and we have the German physician, also the father of the therapeutic system, Franz Anton Mesmer, who lived between 1734 and 1824.

However, it was James Braid, a Scottish neurosurgeon who, in 1795-1860 who took hypnosis fully out of the occult path and named modern hypnosis neuro-hypnosis.

It was believed that there is an invisible force in all animals, a force capable of psychiatric and physical healing. In his research, Mesmer believed in the existence of an invisibility fluid flowing through our bodies, and any blockages or obstructions in the flow of this fluid resulted in all the different maladies experienced by humans.

In his research, Mesmer identified the fact that people with strong animal magnetism would influence the flow/ movement of this vital invisible fluid, healing, and curing diseases. Somehow, yoga relates to Mesmer’s theories, hugely. Even so, Mesmer’s theories were written off, and he was regarded as a fraud.

However, the imaging technologies of our advanced world have enhanced our understanding of hypnosis.

Besides the ideas that Mesmer came up with, it is apparent that hypnosis involves a significant reduction in the brain’s prefrontal cortex ability – this state is referred to as the dynamic mode network. This state is associated with the wandering mind.

Through hypnosis, there is a heightened state of awareness and hyper-focus as a result. Hypnosis, like yoga, create a heightened awareness state. Both practices also result in an overall improvement of health status and mental wellbeing. 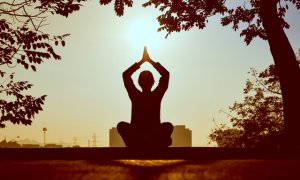 When it comes to yoga and hypnosis, one area/ branch of yoga comes in mind because it has to do with the yoga-hypnosis connection. Yoga-Nidra, to be specific.

Yoga Nidra is also called the Yoga of sleep, and it involves the creation of and reaching a trance state. The trance states have been used for a long time in India, where it’s been accompanied by chanting.

Evoking the trance state is done through different rituals, and the most common result is the achievement of an altered state through meditation.

In the altered state, the people who practice meditation, yoga, and chant rituals have reported achieving a high state of self-realization, improved health, as well as an enhancement of their psychological wellbeing.

As a result of its effectiveness, many folk healing traditions have used trance to invoke good health. For centuries, trance has existed with modern and western healing techniques of psychotherapy and psychiatry, and this co-existence is unlikely to end.

But what exactly is Yoga Nidra? 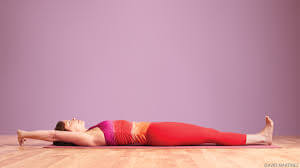 Yoga Nidra refers to one of the older chanting/ hypnotic techniques or practices. It’s has a lot in common with hypnosis, along with many other mind-and-body techniques that are used in psychotherapy for healing.

Over the years, Yoga Nidra has been introduced in Western countries and the subcontinent as one of the most effective systematic and contemporary healing processes. It employs different schools of yoga that have been developed from ancient yogic texts.

Among other benefits, Yoga Nidra has been shown to be very restorative, relaxing, and it leaves you feeling restful. But there’s more. Yoga Nidra is also shown to alleviate stress, ease insomnia,  lower anxiety, chronic pain, PTSD, and chemical dependencies. This yogic technique is also highly effective in heightening your focus and awareness; it helps transform negative behaviors and habits, way of thinking, while also fostering clarity, calm, and peace.

But… aren’t these the same things you’d experience from meditation? What differentiates Yoga Nidra from Meditation?

Yes, there are many commonalities between yoga Nidra and meditation, but the two have some big differences too.

Examples of these differences include attention, the state of consciousness you will be in, as well as the physical position is taken when engaging in either practice actively.

Looking at the physical position taken in meditation and yoga Nidra, you will note that meditation takes place when you are in a seated position and the body alert, upright, and comfortable.

On the other hand, Yoga Nidra requires you to be lying down because its success relies on you letting go completely. So, this yogic technique will involve the use of props, blankets, and pillows, or anything else that would put you in a comfortable and rested position.

However, there are other forms of meditation that would take you through and into higher transcendental consciousness. In Yoga Nidra, however, you will be in a deep state of highly conscious, deep sleep and not in a waking consciousness state.

This form of yoga would also take you through and past the dreaming consciousness state into a very deep-sleep state. But despite being in this deep sleep state, your mind is very awake – hence the description of this yogic technique as an asleep-and-awake, and also the reason for the deep restorative effects of Yoga Nidra.

If you’ve read about hypnosis or have tried it, you can tell that there are more similarities between Yoga Nidra and Hypnosis.

Regarding attention levels, meditation calls for attention on a single anchor like a mantra or breath while Yoga Nidra involves a highly-guided process guiding your attention through different, but specific places in a series of steps.

How does Yoga Nidra Differ from Hypnosis? 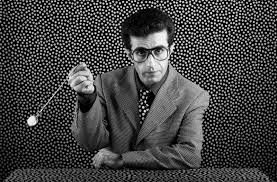 Hypnosis/ hypnotherapy refers to the process through which the person undergoing hypnosis enters the REM sleep stage experienced in the normal sleep cycle. However, it’s important to remember that even in this deep-sleep state in hypnosis, the person lying on that couch isn’t really asleep.

In both hypnosis and Yoga Nidra, the individual is in a receptive state, they are very much aware of their surroundings, and they can see, hear, and respond to suggestions.

At the end of the day, these two practices are created to help the person seeking help to gain control over their pain, behavior, way of thinking, or to beat insomnia.

Both processes are also guided, with the therapist using verbal repetitions, as well as menta images to calm down the patient and to help them relax, even as they remain open to different suggestions without fears of losing themselves.

Note, however, that even with these apparent similarities, Yoga Nidra is different from Hypnosis in that while both practices result in a sensory withdrawal state, they follow different and opposite paths.

The main reason for the differences is that even with the mind dissociated from all sensory knowledge, a person undergoing Yoga Nidra would be in a state of mind that surpasses the level achieved in hypnosis since this yogic practice is intended to take your consciousness as far deep as you could possibly lead it.

It, therefore, means that as you transcend during Yoga Nidra, you’d speed past the range of consciousness that’s reached in hypnosis. Your brain will be completely awake, at which time it will receive higher-quality stimuli, in the process, developing a higher, and a different kind of awareness.

In hypnosis, however, you will be led into that deep REM sleep state where your brain’s shut down completely, meaning that your consciousness in the hypnotic state is quite limited and also confined to a smaller area – creating a tamasic condition. Yoga Nidra creates a sattvic condition.

How Does Yoga Nidra Work

In Sanskrit, Yoga means a ‘one-pointed awareness’ or ‘union’ while Nidra means sleep. Going by these definitions, Yoga Nidra is the practice that allows for the complete relaxation of the mind, intellect, and body by making you appear to be asleep even though your consciousness is awake and active a deeper level.

In this state, the unconscious and the subconscious realms of your mind open. As a result, Yoga Nidra is regarded as dynamic sleep or psychic sleep because it allows you to relax continuously.

With the deep relaxation state attained through Yoga Nidra, your mind will be in a somewhat divided state between wakefulness and sleep. The mind is also quite receptive to the receptivity higher than the level of receptivity you’d experience with your mind in a wakeful state.

The reason, or rather, the secret behind these is that the subconscious mind would take the front seat while your conscious mind takes on the back seat.

The Need for Yoga and Hypnotherapy Combined 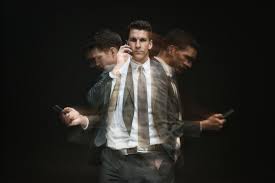 The daily interactions of the world will leave the mind in an agitated state that results in greater imbalances in the Manomaya Kosa (mental layer of the body that dictates your personality), referred to as adhis (stress).

Normally, when this stress is left unchecked, violent fluctuations will erupt the normal flow of prana via the nadis (Pranayama Kosa – your life force). Whenever Pranayama flows through the wrong path and without the right harmony or rhythm, the Annmaya Kosa (physical layer/ frame of the human body) is affected, and these disruptions result in different ailments/ psychosomatic diseases.

With these harmful and disruptive thoughts, habits, behaviors, situational reactions, and feelings programmed so deep in your mind layer, the programming would create mental agitation and inner conflicts that are harmful to your overall health.

To regain good overall health, reprogramming would come in handy, and with the right tools, it can be done easily. Often, the reprograms and the de-programs are too extensive and call for the use of hypnotherapy, self-hypnosis, as well as yoga.

While Yoga and hypnosis have different effects on the unconscious and the subconscious mind, it’s undeniable that these two practices are critical for healing and enhanced health status.

For example, in the deepening and induction phases in hypnosis, both breathing and posture play an important role in misdirecting your attention to activate and facilitate the trance state.

Under the trance state, the conscious mind is kept occupied by the auditory, tactile, or visual stimuli you are exposed to, which means that your subconscious can be accessed and influenced by positive suggestions.

Yoga also helps you access and influence your subconscious by making it possible for you to achieve a heightened state of awareness/ consciousness. Thanks to these techniques, you would be able to attain an enhanced place of thought.

In both hypnosis and yoga, healing is achieved through raising of the mind to a significantly higher plane and not on empowering individuals to struggle harde